In just a few days I will mark four months since I saw Ron leave for heaven. It is difficult to say the exact time he died. It is clear in my mind that his soul, his inner being, his mind was transitioning. His eyes were bright and clear, his mouth partially open, his fingers darkening at their tips. Being with him, holding him, feeling his heartbeat, even while asleep brought me a sense of calmness that was new.

My whole life had been a mentally chaotic array of parties, bullying, bad decisions, impulsive wonderment, and rushing toward something. When I met Ron I was mesmerized by his wide smile, his thick wavy hair, and his routine way of doing spending his day. 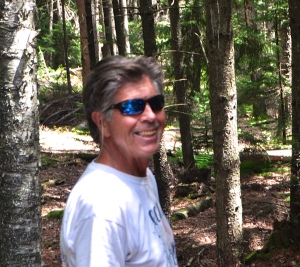 He was as neat as a pin. I have two girlfriends who are as perfectionist as he. They never drop their clothes on the floor. Even when taking off slacks. They hold the waist band and slowly slip one leg out at a time. Then, while still holding their pants they hang them on a hanger, a hook or over the back of a chair. Never once in the six years I watched Ron slip out of his day clothes did he just drop them. There was one day that I came upstairs. He was sound asleep, sawing logs as they say. The recliner was tilted back. In clear view under the foot stool were two dirty socks right their on the polished wood floor. “Wow,” I thought, “he must have worked hard today. Silently I picked them up. While shaking them out I felt this weird sense of purpose. It was an affirmation of my desire to spend my life caring for him. Being there for him. Loving him and giving him the gift of a long term relationship.

I would not be the kind of girl who enjoyed his company, even flirted with him but was never available for him. Certainly, I was not wanting to be just another passing fancy. A girl of convenience who was looking for a daddy figure, or a good time girl who was good in bed. No, I knew for certain as I shook his dirty socks to free the loose yard debri from the fibers and allowed the toe section to fall from the ball it had been rolled in that I found the man I wanted to put before me.

After 35 years of having Danny make his life around me, it was time for me to make my life around someone. I never thought of Danny thinking I was pretty or sexy. He always, every single night we were together, kissed me before we fell asleep. If I went to bed while he was still watching TV, he would eventually come into the bedroom. Gently I would feel him pull the blanket up around my neck, then, lean toward my face where he would place a kiss on my lips, my cheeks or my forehead.

One time, I guess the feel of the blanket move woke me up. I turned toward him lifting my arm. In one swift movement my forearm smacked him on the side of the head. Wow, it started us both. Then, we laughed as I apologized.

When Danny and I would talk about keeping a gun in my nightstand I had a compelling argument. “What if I was having a bad dream and I mistook you for a burglar.” No, I contended, insisted I would never keep a gun by my side of the bed.

Of course now that I don’t have Danny to worry about accidently shooting and Ron left me to go to the great beyond. It matters not. Will I carry a gun in the van, I don’t know. I don’t think so. Well, maybe. Regardless in chatting with camping neighbors I will say I do have a gun. I gotta protect myself. Oh yea, I also have to write five pages for my book today, clear out some yard debri, order a sign inviting campers to join me for some pickin’ and grinning.’

So, for today, it’s time again to do what I can on the tenth day til departure.

For anyone who reads this, I say, FAIR WINDS, especially to new

in her words her and her sweetie, Barry, were ‘out of the gate and turning left.’